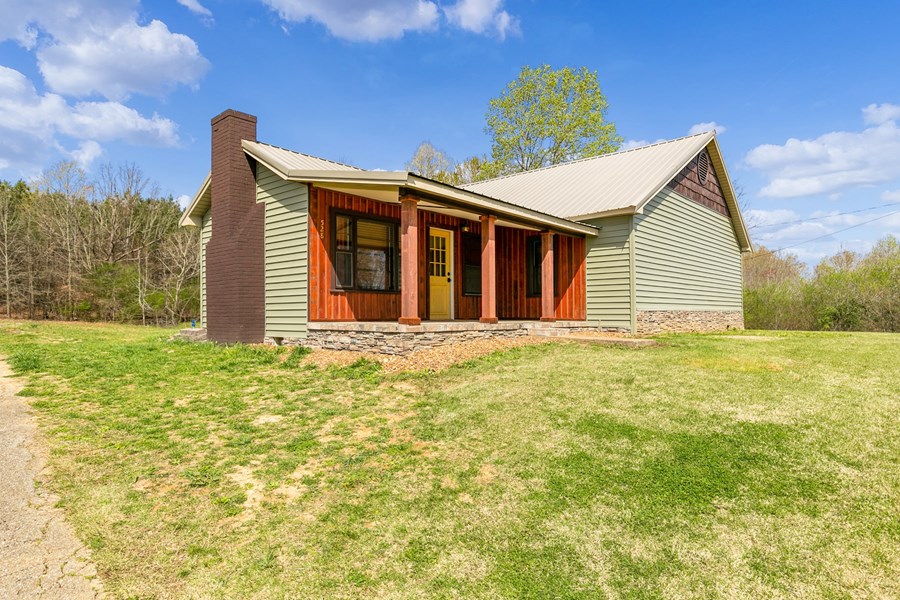 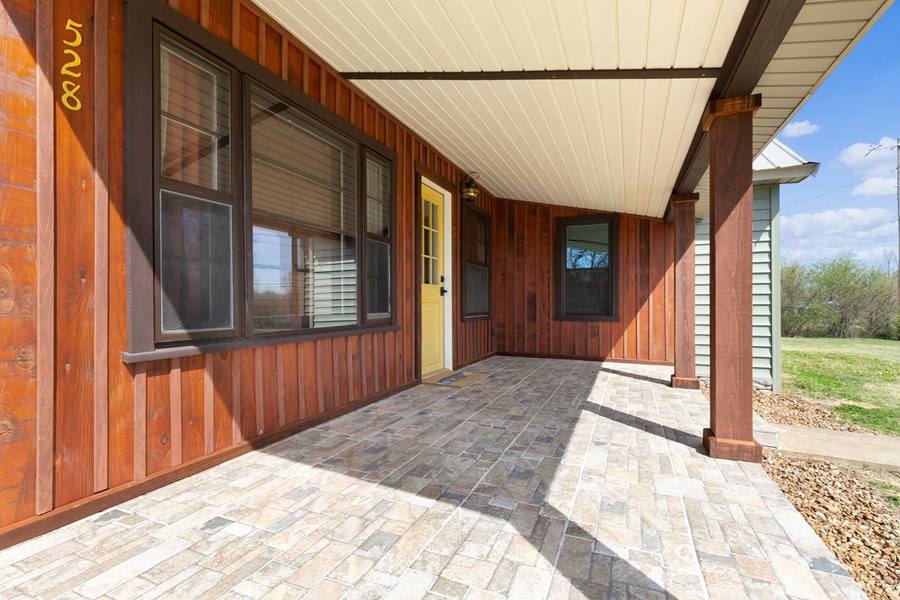 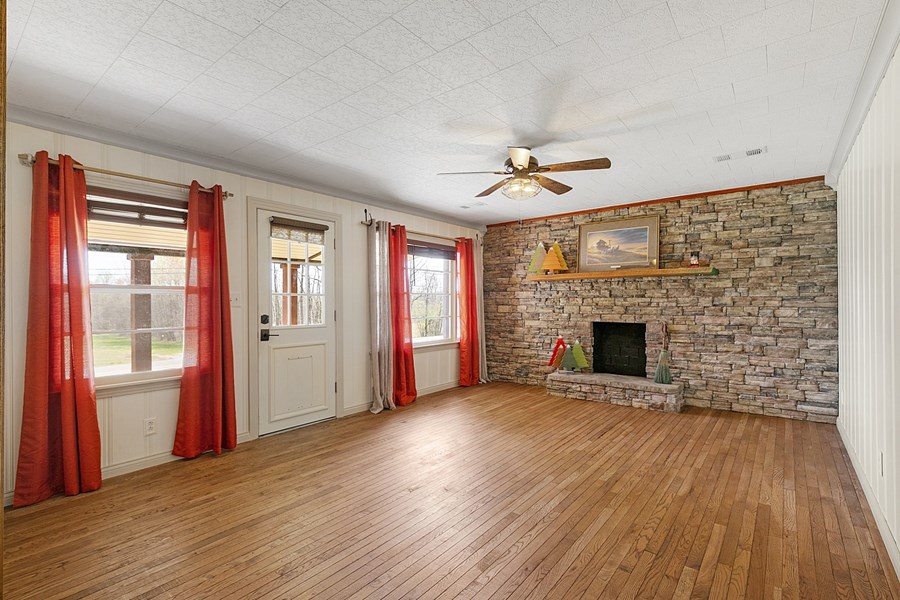 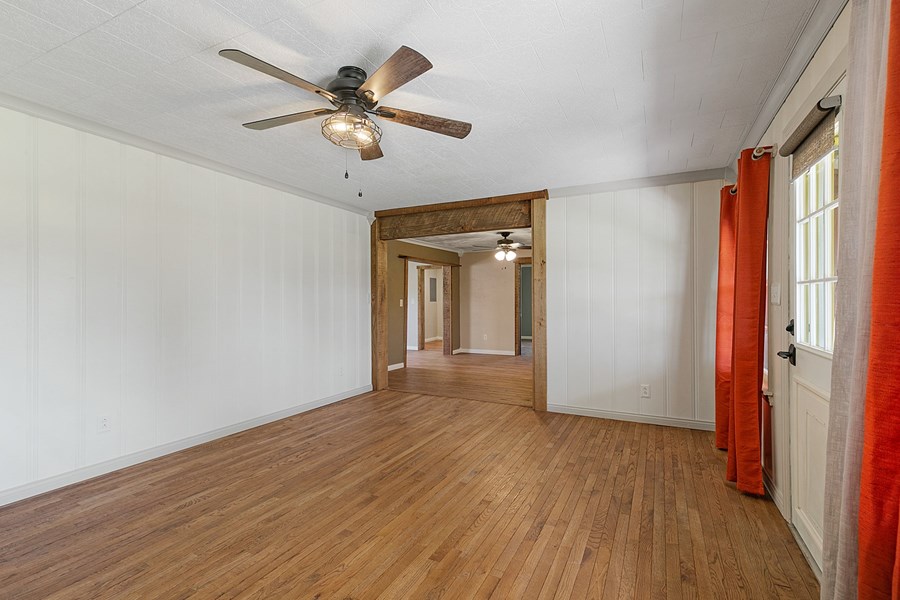 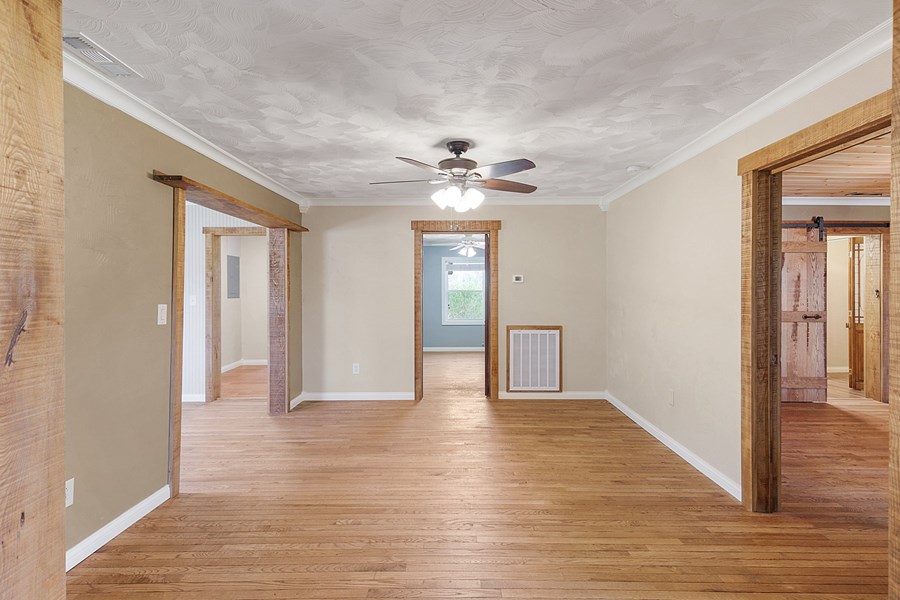 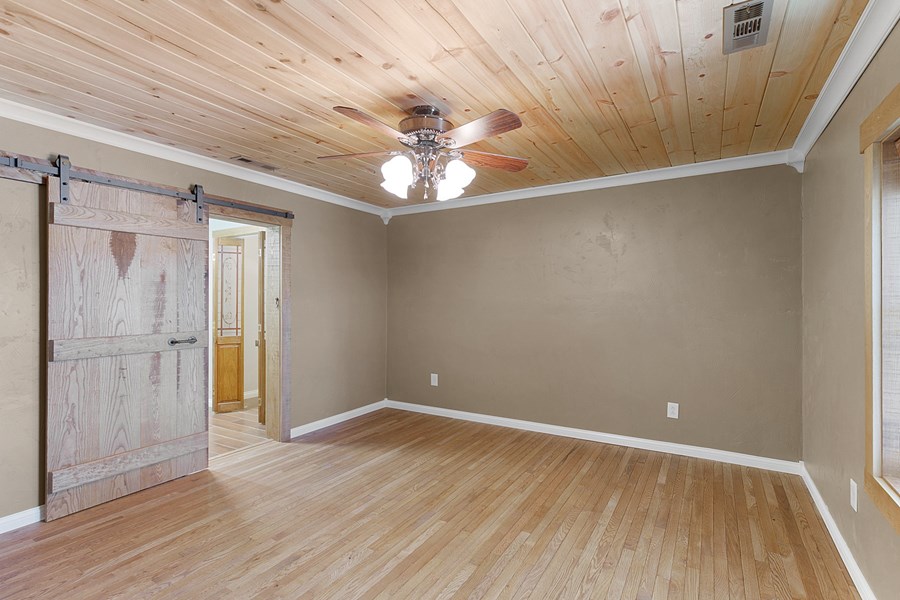 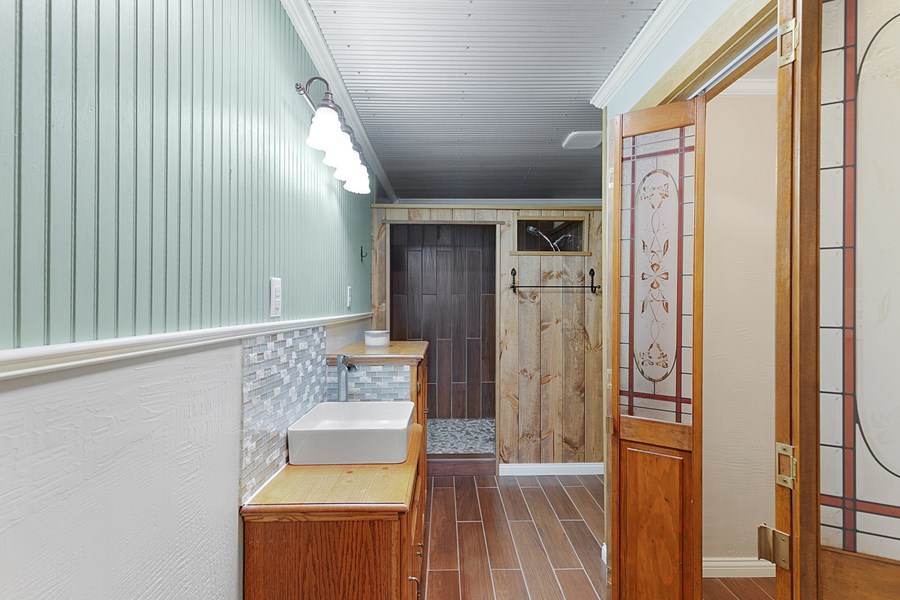 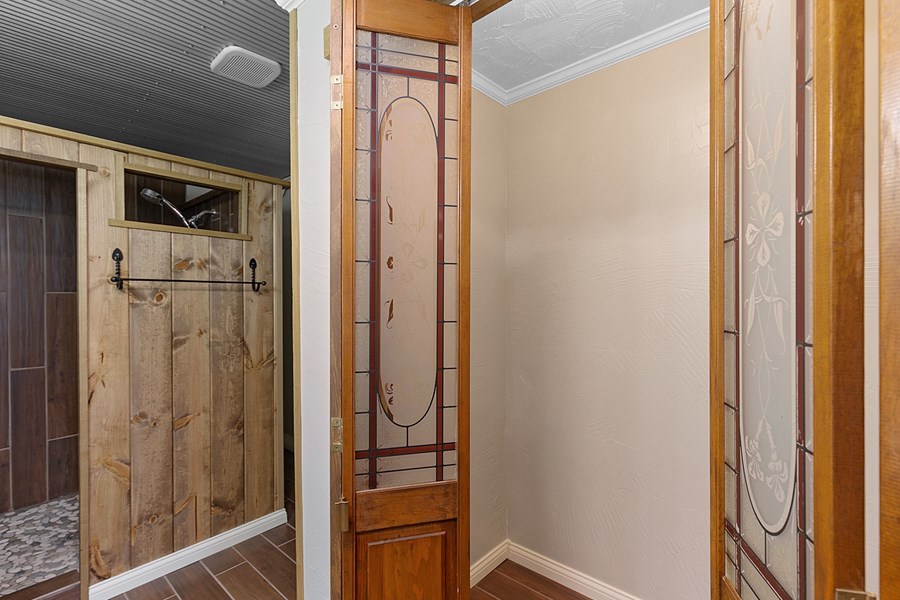 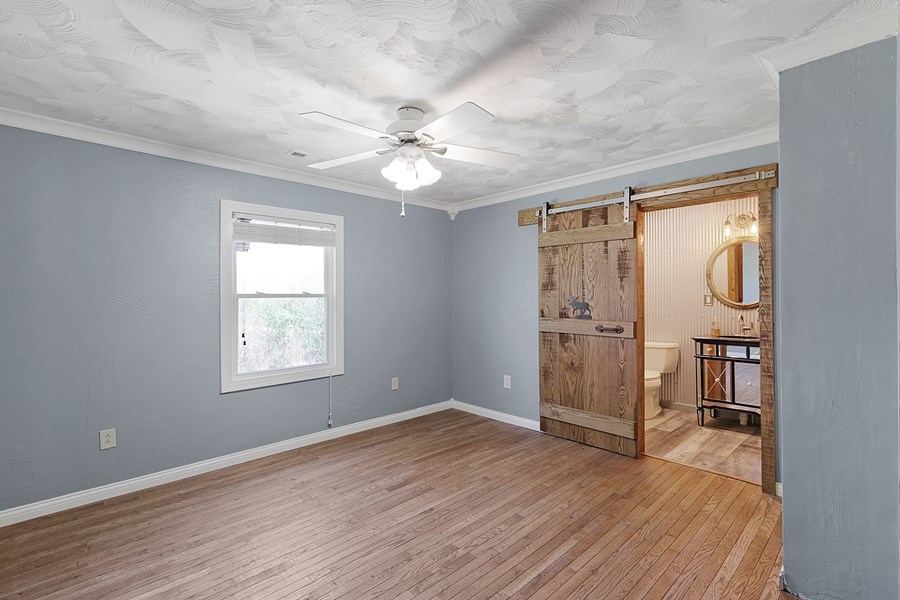 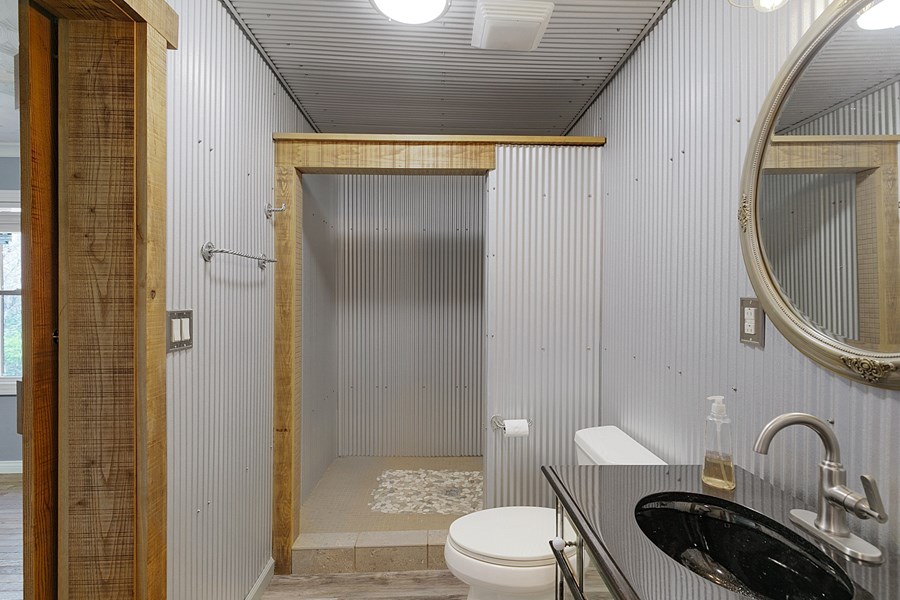 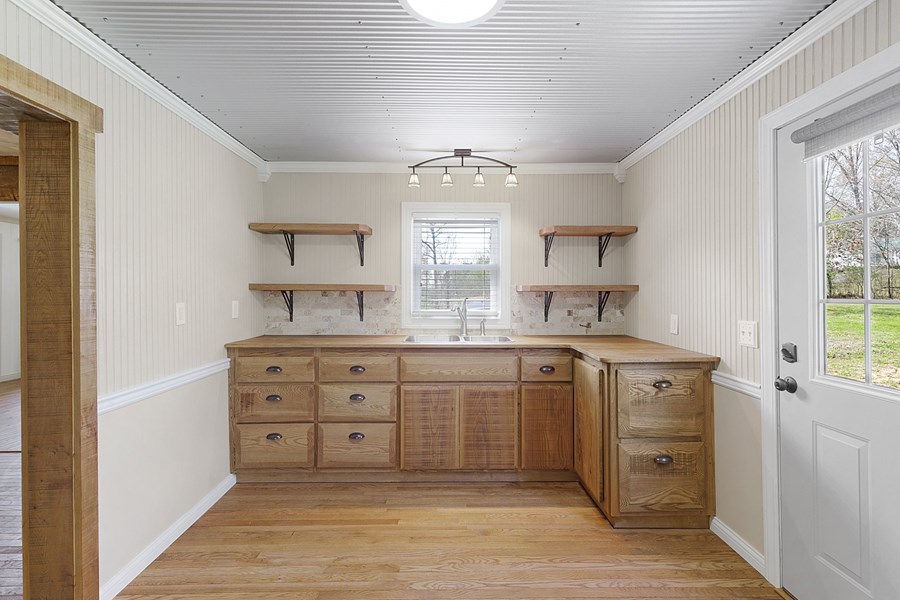 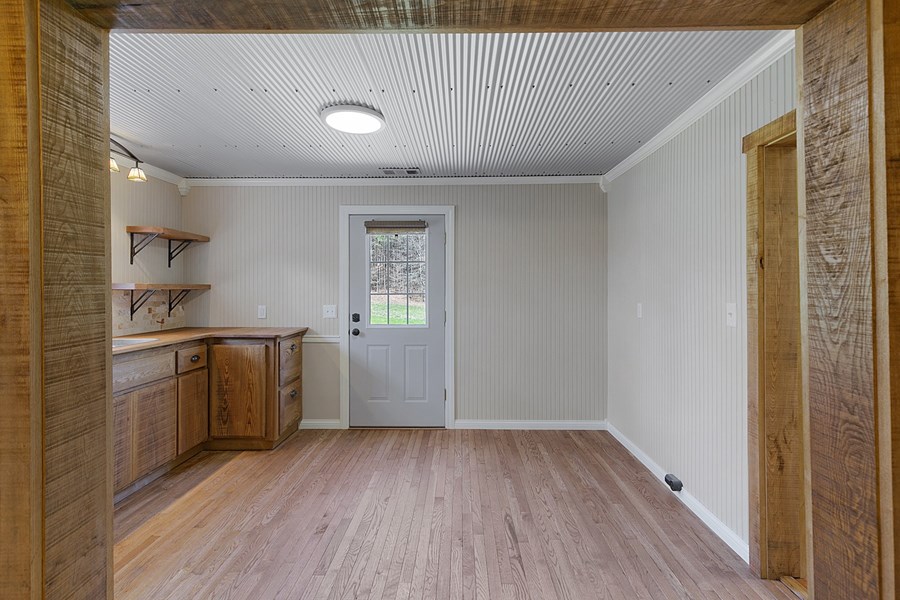 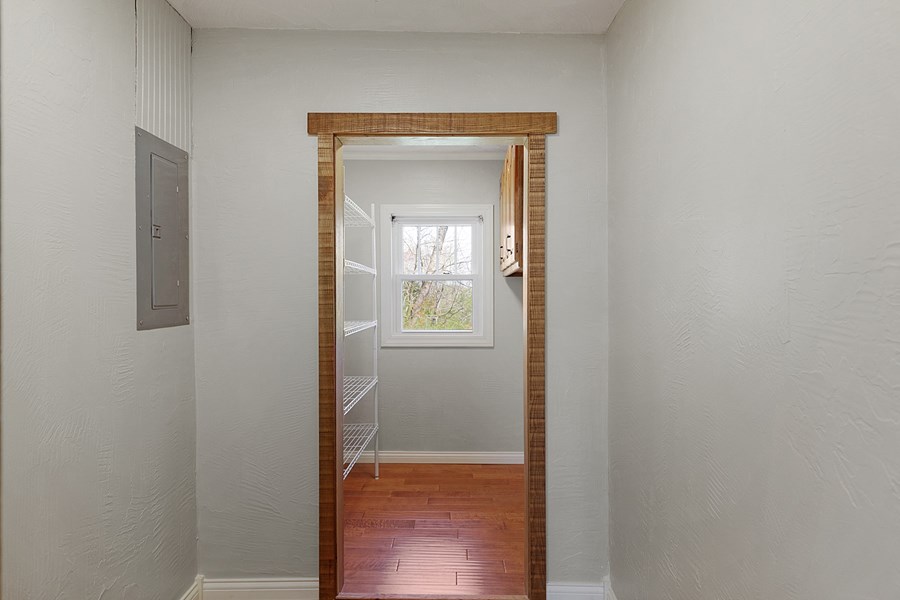 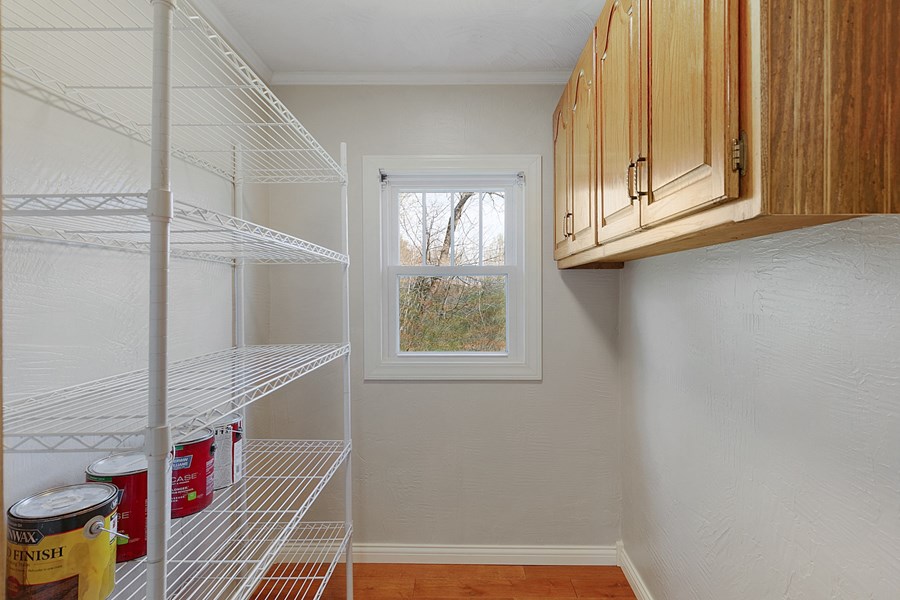 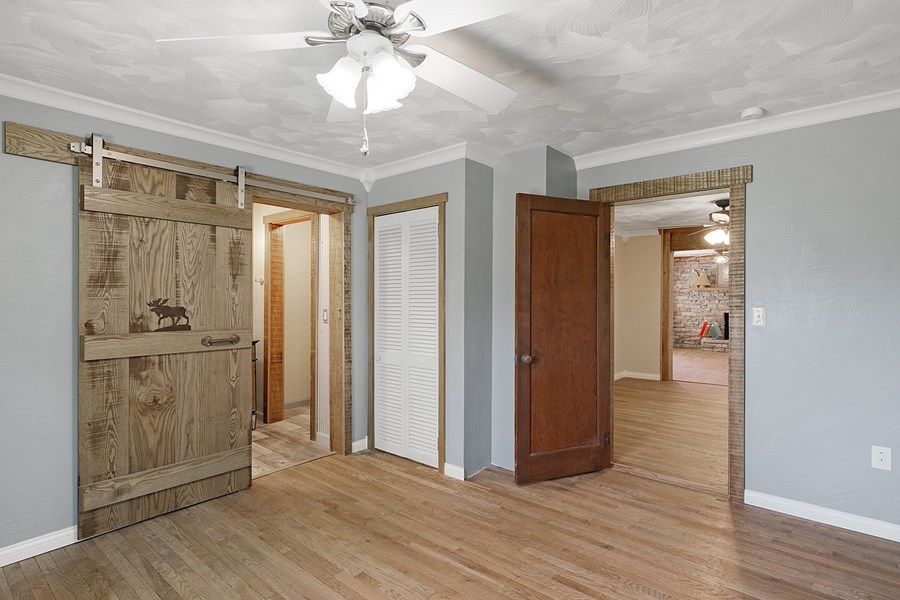 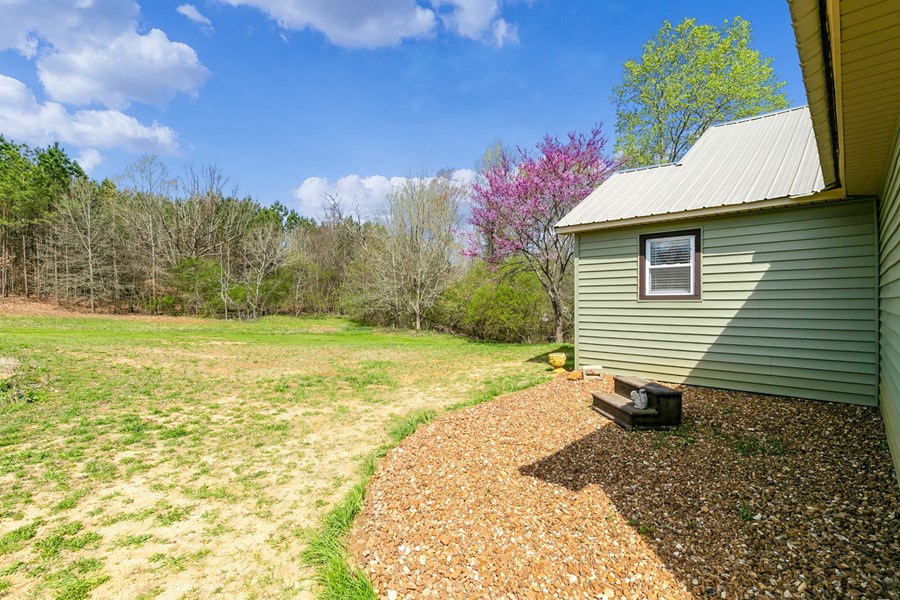 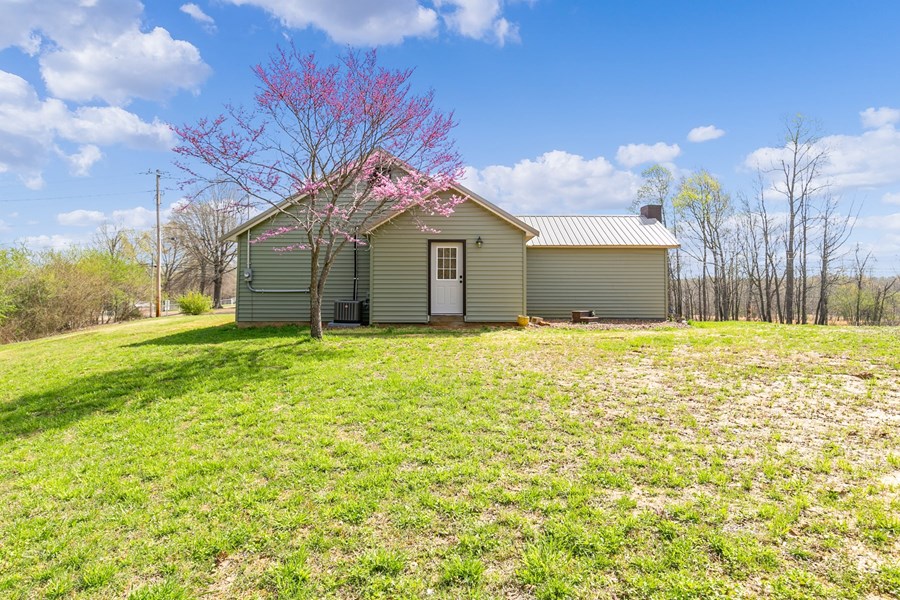 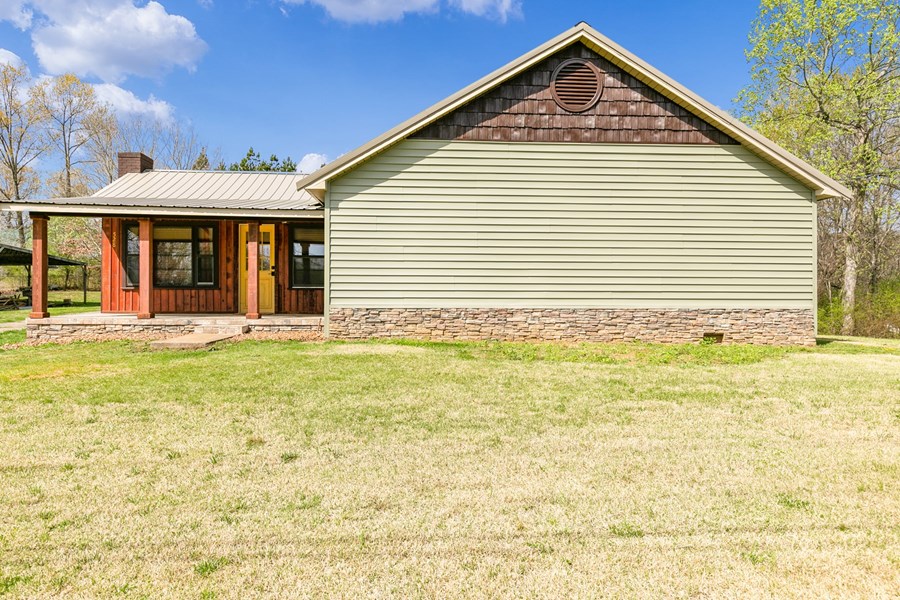 What You Should Know

Why You'll Love It

Adorable Country Cabin on the edge of town in Bradford, Tennessee, located in Gibson County.  Listed for sale is this 1929 Farmhouse which has been completely restored with love from top to bottom. West Tennessee Cottage sitting on a spacious 1.4 acre hilltop lot with plenty of room for your pets, or to raise chickens.

Floor plan features a little over 1200 sq. ft of heated and cooled  living space, with spacious Den / Living Room accented by beautiful stone fireplace and solid oak mantle. The floors throughout the home are spectacular; featuring reclaimed hardwoods which offer an appealing allure. Crown Molding is located throughout, and the decorative natural wood trim highlights doorways and windows in the home.
Kitchen features natural wood cabinets and counter surfaces. New plumbing and lighting fixtures have also been added. Convenient Laundry Room Nook located just off the kitchen, with an additional pantry room that offers additional space for your Kitchen items.

Each Bedroom in the home has it's own Bathroom. Both Bathrooms feature spacious walk-in tile showers, and have updated flooring, lighting, plumbing fixtures, and vanities. Many points of differentiation within this home, attention to detail has been paid in advance. This isn't your run of the mill - remodel. Lots of character and flavor has been added to set this one apart from the rest. Rustic and antique door handles are one example of the rustic flavor. Covered front porch is an excellent place to have a cup of coffee or afternoon tea.
Home has been additionally renovated with New Metal Roof, New Plumbing, Wiring, Windows, Water Heater, and HVAC.

Home is located just inside the city limits of Bradford, TN - approximately 30 minutes to Jackson, TN (retail hub of West TN) to the South, and Martin TN (University of Tennessee at Martin) to the North.  Bradford offers a quiet lifestyle with an excellent school system. Bradford is also the home the annual Doodle Soup Festival and is widely known as the "Doodle Soup Capital of the World"   For more information about this spectacular property, call our real estate office in Gibson County, Tennessee

The city of Bradford was built upon land belonging Robert E. Bradford and partly upon land bequeathed to Vanderbilt University by W.D. Scott. Robert E. Bradford was of English descent. He settled in the Bradford area in 1855 with his wife Mary Baker and owned a house on what is now Main Street. The community in these early days was growing but not officially established as a township. In 1872, the Illinois Central Railroad built a railroad through the sprawling community. In that same year, the early settlers named the new settlement “Kimball” in honor of Mr. Kimball with the railroad company who showed strong support for the development of the community.

Kimball became the hub for surrounding communities to come buy necessities of the day. The new railroad brought settlers, merchants and more business. In 1874, the railroad company built a train station in the town known as the Kimball Station. Merchants established stores such as a grocery, sawmill, cotton gin, drug store, hotel, post office, physician, saloon and one year later a new school was instituted. Churches sprang up and had a strong influence in the evolvement of the town. By 1874, Kimball had become a “sure enough” town. The people of Kimball decided to change the name of the town to “Bradford” to show honor to one of the earlier settlers, Robert E. Bradford and because most of the town was built upon land owned by Bradford. Kendall Station then became the Bradford Depot.

Bradford continued to grow and a new school was built on the site of the present Bradford Junior-Senior School complex. By 1903 the town now had a bank, more cotton ginners, a grain dealer, stock breeder, livery stable, undertaker, blacksmith and wagon maker, and more physicians. Agriculture and timber products, livestock, and poultry were being shipped from Bradford by railroad. As surrounding farmers prospered, so did the town.

The growth of the town took a devastating blow on August 18, 1909, when a fire broke out in a downtown grocery. The fire quickly spread to surrounding wood-framed businesses and the Methodist Church. Before it was contained, the fire had destroyed Bradford’s main block.

It wasn’t until April 2, 1913, that the town of Bradford was officially incorporated and the first official city council was established. New, large homes continued to be built in town and modern businesses such as service stations, garages and a theater appeared. After the state legislature passed an act in 1917 for Bradford to float a bond to provide lights and running water, an electric plant was built and quickly changed the prospering town. In the early 1900s, numerous businesses popped up, some for only a short time and others who structures exist today. By 1920, Bradford had about 600 inhabitants.

In 1928, the first main road was completed and ran through Bradford. The Burlingame Highway now provided another method of transportation along with the railroad. This highway was eventually straightened during the depression years and became what is the present-day Highway 45.

Bradford’s growth progressed but was fairly slow and improvement intermittent up until the 1950’s when modern improvements and new businesses helped to strengthen the economy. Examples include the local telephone company switching to dial service, the construction of a new waterworks plant, extending the city’s corporate limits, construction of a new city hall and fire station, and new factories moving in. By the late ’50s, the population had reached around 1,000. In the 1960s, Bradford saw expansion in the way of a modern medical facility and a large city park.

On February 27, 1967, Bradford experienced another blow to its economy. Almost as if a replay of 1909, a fire of undetermined origin swept through two downtown buildings destroying three businesses. Once again, Bradford would see a rebuilding of its downtown area. A new drug store would be one such business. There would also be change with many businesses in the city throughout the remainder of the decade.

A disaster of an even larger scale, perhaps in the history of Bradford, came once again to the quiet town but this time from the forces of nature. On April 2, 2006, an F3 tornado rips through Bradford and the surrounding countryside with devastating force. The path of the tornado wipes out nearly half of the city and demolishes surrounding homes west and east of the city. This time not only were buildings lost but lives as well. The community was stunned and grieving but once again, Bradford would rebuild.

Although area businesses have declined over the past two decades, Bradford has seen continued improvements and expansion in its school and facilities, governmental and public works operation, and new stores. It continues to be a quaint township of hard-working individuals who come together to provide support for its community and its well being.

Where You'll Find It 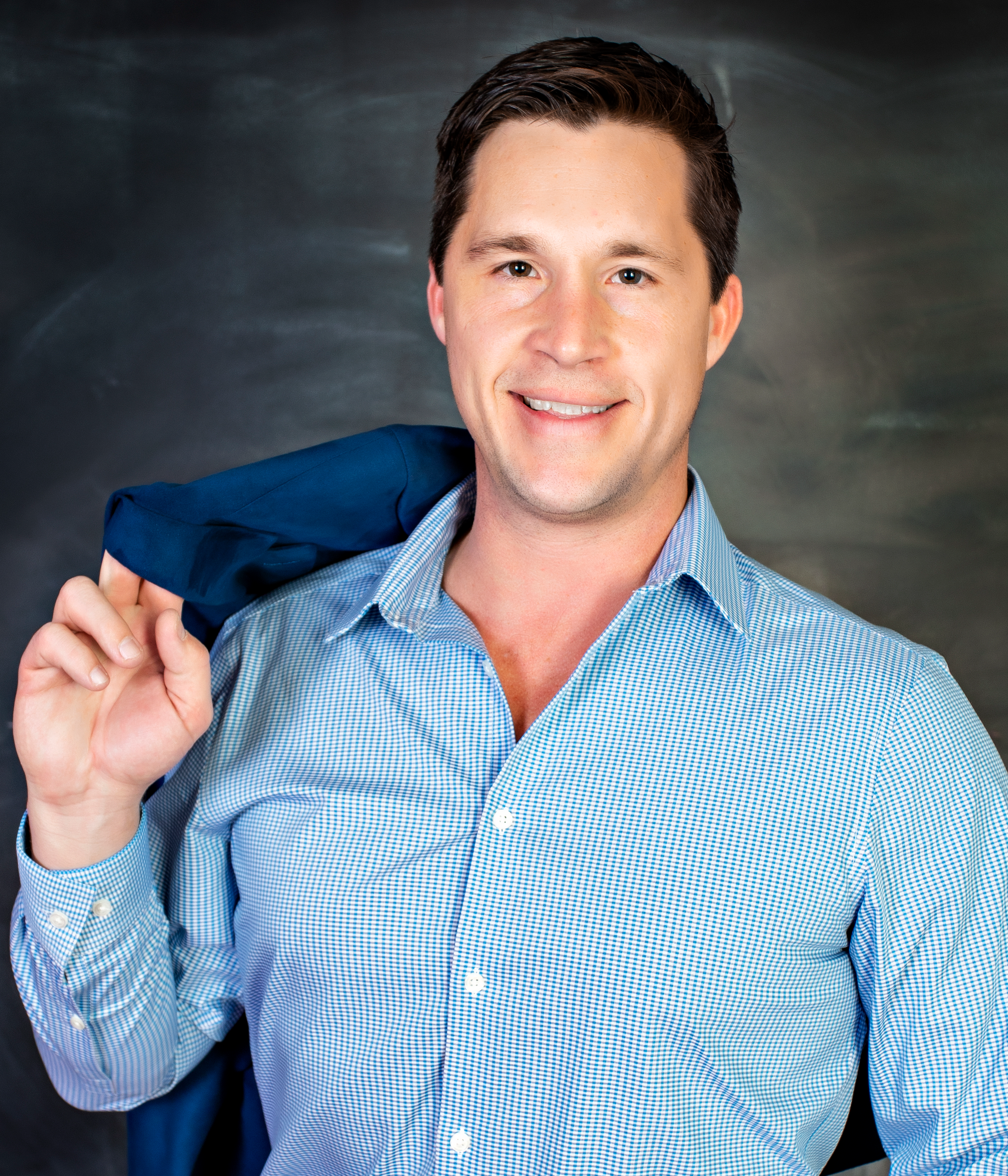 Broker I Owner I Realtor©

Bradley Arnold is 40 years old, and a lifetime resident of the West Tennessee community. Other than helping buyers and sellers realize and achieve their real estate goals, he enjoys spending time with friends and family, watching sports, going to church, and serving in the community.

Professionally, Bradley has been licensed in the real estate business beginning in 2001, however, he grew up in the business; the son of a real estate broker. Arnold knew from the time he was a child that he would be one day be following in those same footsteps. He specializes in marketing Niche listings; Golf Properties, Homes with Land, Bed and Breakfast, Lake Homes, Acreage, Equine Properties, Luxury Homes, Historical, and Commercial. He also specializes in Residential properties in and around the Jackson, Medina, Milan; Gibson County and Madison County markets.

Bradley possesses a great knowledge of the local real estate market, as well as keeping up with important current economic and political issues effecting our community.

If you looking for a top notch professional with the knowledge and skills to help you realize your real estate goals; look no further, and please do not hesitate to contact Bradley Arnold immediately.